"One can choose to go back
toward safety or forward toward growth.
Growth must be chosen again and again;
fear must be overcome again and again."
- Abraham Maslow

What is the position of the members of LGBT+ community in a working environment and what are the things companies can do for their (our) better future?

According to the research, members of LGBT+ community face discrimination even when starting their careers, but they also often come across first challenges during their education.

We talked with Aleksa Savić from the group COME OUT about how important it is that educational institutions, and later companies as well, are psychologically safe environments.

Aleksa wanted to focus our attention to the problems, but he also provided useful information which can help us understand much better everyday challenges these people come across.

1. Aleksa, to talk about employment, it is necessary to first catch up on education. Could you please tell us more about the reality members of LGBT+ community face during their education and what kind of consequences these challenges can have on their employment?

Aleksa: Almost everyone who was educated in Serbia could hear negative comments about members of LGBT+ community from both their peers and teachers. What’s more, discrimination, and even bullying do not happen rarely in schools. School authorities and other peers usually do not react properly to these unfortunate events, but it also hurts when young people cannot share their experiences with the members of their family, because they are afraid of being cross-examined and even more victimized.

In the case of transgender young people, it happened more frequently that a small group of pupils support a young person by addressing them with the right name in the right gender. On the other hand, school personnel are mostly reluctant to find out more about the challenges this young person faces. All of the mentioned situations, in many cases, result in the person’s decision to transfer to part-time education and social isolation. However, often this decision to leave the public educational system, and losing faith in education in general result in the lack of competencies for dignified and proper employment in the following years.

Still, young people have now become more courageous when compared to previous generations, and many react to injustice in schools more frequently, which also helps them get support more quickly. High school students who visit the social center COME OUT (in Petra Drapšina 34), often take our handbooks about working with young members of LGBT community in highschools and give them to their class teachers.

2. What kind of discrimination young people face during their employment?

Aleksa: In case of sexual orientation, discrimination during the process of employment usually is not easily probable, because the representative of the business where this person wants to work rarely asks direct questions related to sexual orientation. In case this person has prejudice about LGBT people, he or she makes assumptions about the sexual orientation of the person interested in that specific job position, usually led by social stereotypes (for example, based on the physical looks, the tone of voice, gestures, etc.), and they decide not to hire that person.

In case of a gender identity, young people experience discrimination during their job interviews at their early youth, when an employer does not address them in the right gender and implies what kind of physical appearance is expected of them in the working environment (for instance, an employer required a transgender girl to shorten her hair explaining that male employees cannot have long hair due to “personal hygiene reasons”; since the girl was at the time in the period of social transition, her sex was still specified as male in her ID).

In case a person gets a job, he or she experiences mobbing by their colleagues and superiors, from heteronormativity (expectations that an employee is attracted by persons of the opposite sex) and lack of a possibility of gender self-identification (when the employee has a possibility to determine their gender based on their needs) to gosipping, forced outing (sharing information about the gender identity and sexual orientation of that person without their approval), ridicule, humiliation, blackmailing and bullying. In Serbia, there have been a few cases of mobbing LGBT people which resulted in them commiting suicides over past ten years. 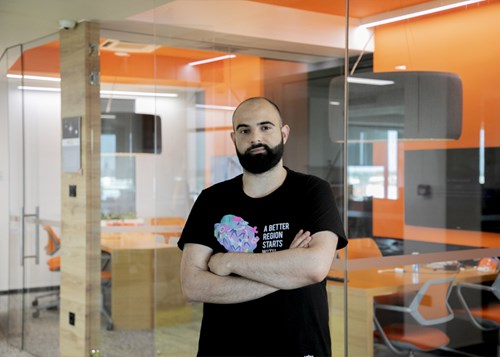 3. In what ways companies can contribute to raising awareness about the difficulties members of LGBT+ community have when looking for a job? This also includes the education period.

Aleksa: In a narrow sense, companies that have a direct impact on the educational system, like book publishers, school equipment producers and sport clubs which offer services to young people in education, should not follow gender norms. Instead, they should make their products and services non-discriminatory and available.

Companies need to be more informed about the challenges LGBT+ people face by actively asking outed employees who are members of the LGBT+ community about how they feel at work and what could be done in order for them to feel safer and more welcome. In case there are no outed LGBT+ people in medium-sized companies, this is a sign that this kind of environment is not recognized as a safe environment for outing. It is important that companies directly and openly communicate their attitude about LGBT+ community with their employees and wider community, as well as to develop intern policies and mechanisms which, on the one hand, they will use to support learning about diversities, and, on the other hand, clearly sanction discrimination.

In a broader sense, it is important that employers understand that LGBT+ persons are people who, due to discrimination they expereince daily in Serbia, have fewer opportunities, and that many of us need to make more effort, need more time and support to achieve a certain level of success, when compared to our *cisgender heterosexual peers. In practice, this means that an average LGBT+ person in Serbia had to invest more time and energy in coping with peer bullying, lack of understanding, pressure and rejection by their family and other people, which made their process of education and career development much harder.

4. Research conducted by IDEAS from 2021 showed that 24% of LGBT+ persons declared that they experienced discrimination, and 20% of them said they experienced discrimination while looking for a job. We are aware that different researches cannot be fully precise because a large number of LGBT+ people are too afraid to take part in these studies. However, we are still well aware that discrimination exists, and maybe the percentage representing the frequence of discrimination is not even that relevant here. Over the years, we have witnessed different initiatives in our country, many associations have been established, activism now has an important role in the local community. How do you see the further development of these initiatives and where can you see space for improvement?

Aleksa: Ah, well. It is true that there is some kind of improvement and that the topic of sexual orientation and gender identitiy is more frequently in the center of public attention - mostly through pop culture, but also through agendas of public institutions. Still, the steps made by LGBT+ people who fight for their dignity and motivate others to do the same through their outing and reactions to the injustice are the bravest ones. I would like community not to view the unfortunate position of LGBT+ community as a challenge of a marginalised group, but as a responsibility of each and every one of us, because the way how other people treat us determine the above mentioned challenges in our lives.

It is important that every parent, teacher, health worker, employer, friend and neighbor understands that they have the power to make the life of an LGBT+ person much better, more fulfilled and more dignified. In general, it is important that we support activist initiatives which take place outside Belgrade as well, to eliminate discrimination in public spaces, and most importantly, to be available to overcomers of discrimination and bullying. To listen to them actively and try to understand their experience, instead of defining it ourselves.

5. We need to touch upon “pinkwashing”. I would kindly ask you to share with us what good practices companies need to implement throughout the whole year in order to raise awareness about the rights and needs of the LGBT+ community?


Aleksa: For a start, ‘pinkwashing’’ means presenting the company as the entity that supports LGBT+ community for the sake of making profits. One of the types of this kind of practice is publicly giving support to LGBT+ community when the public expects this. In case the company really cares about the well-being of LGBT+ people, they will improve internal working conditions and contribute to the position of LGBT+ people in a wider community continuously. It is important that the company understands that acknowledging the dignity of LGBT+ people does not, unfortunately, happen by default in Serbia. This is why it is important for companies to make it clear in the job advertisements they promote that the company welcomes people with different sexual orientations and gender identities.

Employees should be given a chance to learn about diversities, which can be done through facilitated internal events or collaboration with the associations who are focused on the position of LGBT+ community in the society, such as the Group COME OUT from Novi Sad.

Instead of putting pressure on employees to out themselves, companies need to leave them enough space to do that if they really want to. Companies can give support through direct addressing at internal events, development of internal policies which sanction discrimination, making the symbols of LGBT+ community visible, and other examples. In case the company does business with partners or clients who have prejudice about LGBT+ people, it is important that it takes care of the safety of their LGBT+ employees. But it is also important for them to approach possible discrimination by standing up for their employees instead of viewing this situation as an obstacle on their road to making profits.

By opening doors to new perspectives, active listening, understanding (which does not necessarily imply accepting) we can influence the creation of psychologically safe environment for everybody.

Everything about Maja's CV screams Industrial Psychology, and she's riding the new wave of personnel administration as Vega IT's Chief People Officer.

What do we do differently? Front-end development internship
Star...That Makes Others Shine
How Team Building Activities Bring Us Closer Together